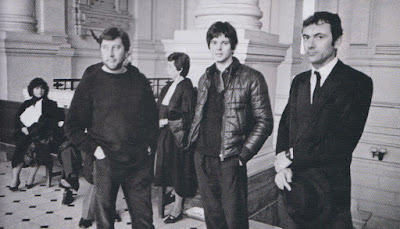 This month's Mojo features a piece on 'The Gospel According to the Meninblack' album. To be honest for the well-versed fan there is not much that is new information in the content, but it is great that the band's most misunderstood and maligned album is getting some serious, critical recognition.

What is also nice to see is that all of the key players in its creation i.e. Hugh, JJ, Jet and Dave, each contribute to the article. Even better is the unanimous consensus that they independently reach that it was the most accomplished album that the four of them put together. A commercial disaster yes, but an artistic and conceptual triumph no doubt.

I know that this album is very close to JJ's heart, despite, or maybe because of the psychological turmoil that surrounded its inception and recording.

What was new for me was the above photo take within the Nice courthouse.

Assuming that the band endure through to 2021 a live tour of this album would make a great swansong, not to everyone's taste and guaranteed to send the Britannia Music Club set to the nearest exit. It would however be totally in keeping with my band, a band that refused to conform to industry/label expectations. Leave a 2021 audience as bamboozled at the end of the gig as you did in 1976!
Posted by Musky03 at 22:27

Email ThisBlogThis!Share to TwitterShare to FacebookShare to Pinterest
Labels: 1981, 2019, The Stranglers