‘More deadly than the doodlebug, more awesome than the atom bomb itself…. Ladies and Gentlemen, The Purple Helmets!’ 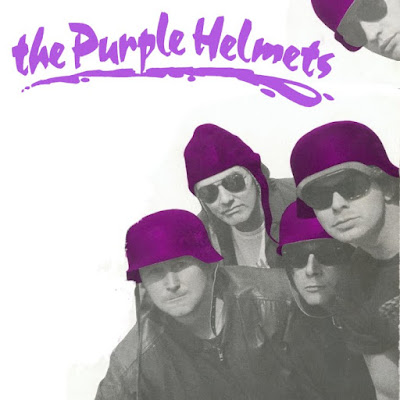 It was almost a case of blink and you missed them. If you lived too far from London it is all the more likely that you would indeed have missed them. The pulse of The Purple Helmets throbbed with vigour for a couple of short years, in which time they only played a glandful of gigs in the London environs, plus some brief appearances in France.

The Stranglers had toured heavily throughout 1985, 1986 and into 1987 playing dates all over Europe and in the US and Australia. The Stranglers were overdue for a break.

To a fan like myself, 18 in 1987 and only recently for the first time in possession of some disposable income (thanks to my weekends spent mopping up blood as a domestic hand in my local A&E department), this band hiatus, whilst deserved, was quite frankly a major disappointment for me. I had some money, independence and was raring to go, but The Stranglers had gone to ground.

I did what I could in 1988. Tickets were bought for a planned AIDS benefit at Wembley Arena in where the band was to play alongside The Communards, amongst others. As a result of bad promotion, this gig was pulled and although JJ responded to my written moan by putting myself and Steve Tyas on the guest list for the band’s gig in Berlin the following month, the logistics of getting to a gig in the Middle of East Germany ruled the offer out. Dusseldorf and Milton Keynes followed, but two dates were a poor substitute for a tour.

So how exactly was this Stranglers shaped hole in my life to be filled, enter the form of The Purple Helmets (on reading that line back it sounds wrong in every way!).

The Purple Helmets brought together JJ, Dave, well known Stranglers associates, Alex Gifford and John Ellis with Tears For Fears drummer Manny Elias completing the line up.  If the SIS press release for their album ‘Ride Again’ is to be believed, The Purple Helmets were true rock survivors having completed the traditional Beat group apprenticeship of amphetamine fuelled nights in the clubs of Northern Germany before burning out on the West Coast of America on a breaker of alcohol and Class A substances. But old rockers never die and the lure of the boards brought these five men back together in 1988 to do it all over again. As promotion it read well….. but as to its authenticity, well I had my doubts! 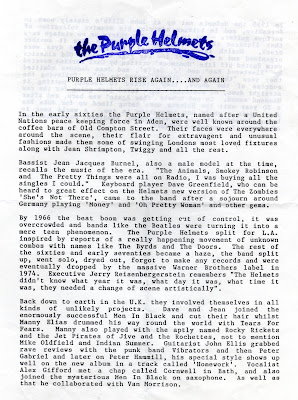 In truth The Helmets first stepped out in Rennes in late 1986, but then went to ground again until 1988 when starved Stranglers fans had the first opportunity to see them play dates in London.