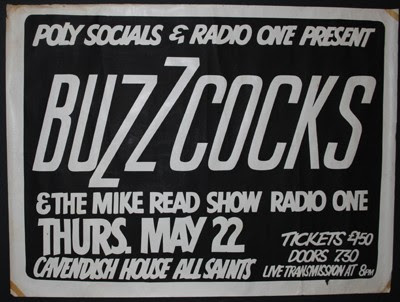 OK last one for today. Here the lads are back in their home town playing for BBC Radio 1 at the Polytechnic. This is the full set that was broadcast and may be the complete set for the gig, I don't know for sure. Notable in this is Pete's dedication of 'Strange Thing' to Ian Curtis who had hanged himself in the early hours of the previous Sunday.

This short set includes three tracks from a trio of singles released that year that went under the name of Parts 1-3. To my mind as brilliant as the hormone drenched, teen angst earlier singles are, these three releases (Parts 1-3) are about as good as Buzzcocks get, completely left field stuff, dark and experimental. Some of it should not work but it does. As constant touring wore the band down and the use of ever heavier drugs started to take their toll, the frustrations, tensions and paranoias colluded to produce some of the bands most creative and innovative music. In The Stranglers world similar internal and external pressures gave rise to 'The Raven' and 'The  Gospel According to the Meninblack'. Not immediately accessible to the fan base, especially the latter, these albums are now highly thought of and the same is true of the last released Buzzcocks material.

Email ThisBlogThis!Share to TwitterShare to FacebookShare to Pinterest
Labels: 1980, Buzzcocks