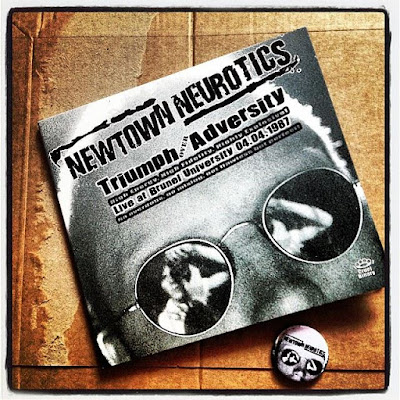 Finally getting a proper release (this was made available online a good few years ago), Steve Drewett has put out the band's gig at Brunel University from April 1987.

It would have been shortly after this gig that I visited the Brunel campus in Uxbridge on an open day and I remember the poster for the gig well, hanging on one of those round display pillars (can't think of the proper term). This prompted me to think 'This place might be alright then'. I eventually arrived at Brunel in late September 1988, but sadly the Neurotics didn't come back. The nearest to an Uxbridge Neurotic event was an appearance by Steve at Uxbridge Labour Club. This was in October '88, but sadly I, amongst a handful of students with limited common sense and zero knowledge of the area, failed to find the venue..... 'Does Anyone Know Where The Gig Is?'. Actually it was only a few minutes walk away from the campus!

Brunel did get me into London in time to see a couple of the last gigs that the band did, a benefit at the Electric Ballroom (for Cable Street Beat if I recall correctly) and the last gig at the Fulham Greyhound on 29th October 1988.

Anyway, here's Steve Drewett's words on the album, which ends with a link to where you can get hold of it should you feel so inclined.

Here at last, the legendary Triumph Over Adversity. The Newtown Neurotics live at Brunel University 04.04.1997 album.

'Triumph Over Adversity' is a terrific live album, how can it be anything else when the band were declared to be ‘One of Britain’s greatest power trio’s by Q magazine in May 2009 along with The Jam, Doves, Stereophonics, Motorhead, Muse, Cream, The Police, ELP and Manic Street Preachers”.

The band has long wanted this recording to be released as they feel it lives up to the Q magazine accolade perfectly.
The set was also close to being explosive as is explained by the story contained within the sleeve.
This release was in the middle of production when Colin Dredd aka Colin Masters died on the 19th March this year. This is not a cash-in, the artwork had not been completed when Colin passed away, so we updated and dedicated it to his memory.

The album showcases Colin in full flight, tight and fluid bass playing embracing and entwining with the rhythms of the drums, and singing his heart out until he was hoarse.

The cover version of Stand By Me included on this album was played as the last piece of music in this funeral 'set list' service to highlight the bond Simon and Steve had with their old friend and to celebrate his musical exclusivity with the group. Punk rock fact: The Newtown Neurotics was the only band he ever played in.

There is a free 'Triumph Over Adversity badge' given away with each purchase until the badges run out. Buy the album, wear the badge and listen to why he was proud to have only played with one band in his lifetime!
Follow the link on the image or the text to buy.

Here is the link to the album on sale on Amazon any purchases of which are then directed to the Drewett fulfillment Centre, i.e me.

Email ThisBlogThis!Share to TwitterShare to FacebookShare to Pinterest
Labels: 1987, Steve Drewett, The Neurotics, The Newtown Neurotics