Good For You Alan! 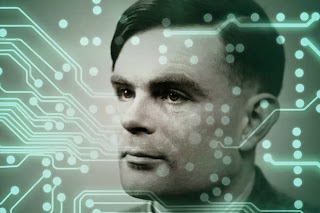 Today we have the news that at the Governments request, Alan Turing has received a Royal Pardon. A somewhat empty gesture, but important nevertheless for those that knew and loved him.

It is to him that many thousands of individuals, on both sides of the conflict, should offer thanks for the survival of fathers, sons, brothers and husbands since as a result of his genius the slaughter of the Second World War was ended at least two years earlier than it would have were it not for his (and all of the other codebreakers) work.

It is probably improper to pass judgement on those within the establishment that meted out such harsh treatment to the man. I still hold the view that given his unique contribution to the war effort, Turing's 'crimes' should have been conveniently overlooked.
Posted by Musky03 at 14:30