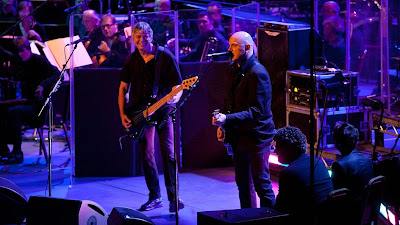 And so the long awaited date was upon us at last. Along with getting back out to the East Coast of America in June this must rank as one of the peaks for the band in a successful year. I read somewhere that The Strangers were the first band to be invited to play this highly traditional annual festival of classical and orchestral music since Soft Machine in 1971.

That fact aside, I think that it is still incredible that the BBC felt that they could invite The Stranglers who it is fair to say have never courted the favour of the Corporation. So was their appearance at Monday's late night prom, under the banner of BBC 6 Music, finally a sign that The BBC has made its peace wit The Meninblack? Could more invitations come off the back of this? That I suppose remains to be seen.

Once the family reached SW7 we made our way into High Street Kensington where we were fortunate to meet others in a pub that was comfortable to allow children into the bar (at a relatively late time). We did think that this was a great excuse to bring the kids into London for a portion of culture..... it was The Proms after all.

For the performance, we were in the Gods right at the back, so the view of the band was none too good, but I didn't mind because it was the spectacle of it all that counted for me tonight.

Although I have edited the radio broadcast down, I haven't really had the opportunity to listen again to the songs, so my comments are from memory.

'Heroes' sounded good, although I didn't think that the sound was that great, but then again by all accounts the acoustics of the RAH aren't considered to be particularly good for classical music, let alone rock. After a 3 minute fix rest of the bill got under way.

In summary, the orchestral pieces (and I'm not talking about The Stranglers arrangements here) were rather interesting..... especially the piece for 13 percussion instruments.... the first music that Frank Zappa bought apparently that went by the name of 'Neural Necropathy'.... I am sure that it did indeed have the capability of killing off certain nerves! It did however amuse the kids greatly and I gallantly suppressed my laughter whilst tears streamed down my face. call me a Philistine if you wish!

Cerys Matthews did a notable piece from the court of Henry V which I though sounded great and was a brave thing to do. In contrast I found flavour of the month, Laura Marling tobe dreadfully dull..... although she does have a great voice I admit.

Approaching the end of the evening and The Stranglers ambled back on stage for the finale. 'Duchess' and 'Always The Sun' were played alone whilst the orchestra looked on. It was when it came to the last song, the inevitable 'Golden Brown' that the London Sinfonieta kicked in, this was to be the example of the world of classical and rock music coming together in harmony. Oh, were it so! Despite the best efforts of both the band and the orchestra the two world's kind of collided. Both elements were seemingly in time, but not necessarily together. Take a listen for yourself. It was nevertheless, an experiment in sound that I am glad to have witnessed and the evening was without doubt highly enjoyable.

Also, for the band, this was really something special and for that as well I am glad to have been there with them. Baz seemed rather stunned by it all in particular.

With artwork kindly provided by MeAnIe (thanks as always!). Enjoy! 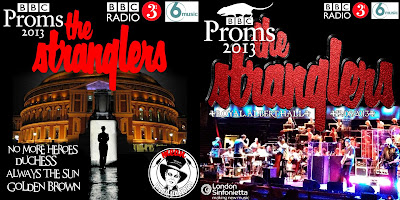