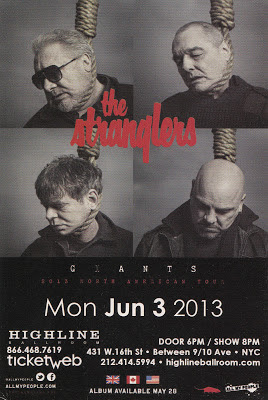 The cab booked to take us to Heathrow arrived on time at 4.45 on Sunday morning, but this was an early start not to be begrudged. The time had arrived to make the journey to New York to see the band on their long awaited East coast tour.

With security behind us all that remained ahead of boarding was a holiday drink in one of the Terminal 5 bars.... a large pinot grigio for me to steady the flying nerves (actually I don't get them but it serves as a good excuse!) and a large vodka and coke for Gunta.

On board, things didn't get off to the greatest of starts as sitting in the four seats directly in front of us were the worst behaved quartet of children I have come across in a long time. Their parents had inexplicably chosen to sit elsewhere in the plane actually in the front part of the same cabin. Over the course of the next 3 hours much heated discussion ensued with both the brats and parents of the brats. In the end we had the stewards (who by this time were also hacked off with the many demands of theses arrogant children) intervene and here our luck changed. One steward got quite exited on spying my Stranglers shirt, declaring himself to be a big fan. We duly explained  that this was in fact the reason for our journey and we were seeing the band in New York to mark our wedding anniversary.... he said he's see what he could do. First several drinks arrived (ahead of the normal service) to calm our frayed nerves. Then he relocated us in a higher class cabin before supplying more wine and glasses of champagne for the anniversary. What a nice man! And so it was that we arrived at JFK a little unsteady but relatively relaxed.

A look at the free subway paper featured the band's appearance on the morning of the gig. 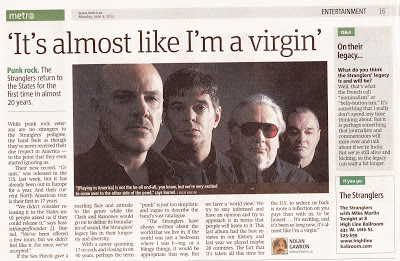 Metro New York
3rd June 2013
However, the front page of the same paper lazy journalism promised something unlikely to be delivered!! 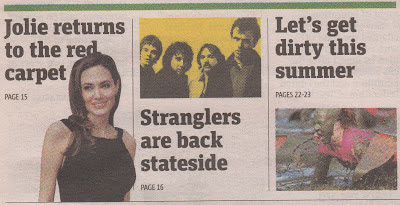 Skip now to 4 pm on Monday and we are in the 'meat-packing' district down by Chelsea Pier, The Highline Ballroom is very close to the renovated Highline Park, on what was an elevated section of the New York Central Railroad. This section has been converted into an urban park area with a railway theme.... very pleasant it was too. As for the venue itself, for certain it doesn't like to announce itself. There is nothing to announce the existence of a venue, the only clue to its identity was the address number '431' chalked onto the black door, to find the place I had to crib the address from a local newsagent by flicking through a copy of 'Time Out'. Having established the location of the venue it was time to visit a couple of bars. In one bar we met and started chatting to a couple of guys from the Bronx who had been seeing the band whenever they rolled trough New York for many years (Cheers Ed and Larry!). 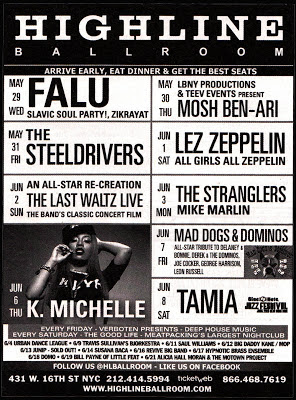 Got there a day to late to see the All Girls All Zeppelin combo that went by the name of 'Lez Zeppelin'!

The stage area in the venue was entered via a set of stairs at the top of which was an electronic bill board (the type favoured in a lot of venues these days) that was advertising tonight's gig alongside a date by a Hugh Cornwell (albeit separated by 6 months). The interior of the club was promising, it being dark and dingy, but like many US venues, padded sofa booths and tables were placed quite near to the front of the stage. As you can see from the Highline flyer, punters are encouraged to 'Arrive early, Eat Dinner & Get The Best Seats'..... as if.....MADNESS!

The support was competent but with the excessive use of a lap steel-string they were far too C&W for me! The good thing was that the change in support arrangements meant an earlier start for The Stranglers so that the first bars of 'Waltzinblack' were heard at 9 o'clock.

The set thankfully did not overly bend to the expectations of the audience save for the reintroduction of 'Time Was Once On My Side' (actually I was expecting the new album to be better represented). Baz was on great form and seemed to take up from where Hugh left of in terms of winding up his American audience. On encouraging some applause for the support act, he singled out a non-clapping individual up on the low level balcony with words along the lines of 'Why aren't you clapping.... look at you too cool to clap like some actor whose name I can't remember!' This chap looked none too pleased at the put down. Moreover, Baz it appears had been watching 'Taxi Driver' on a loop as he did his level best to sound like Travis Bickle!

Pleasingly, the presence of the small travelling British contingent was acknowledged (about a dozen I suppose). The band themselves were clearly loving the opportunity to play once again to an appreciative New York audience and this was reflected in their performance..... tight and very energetic... Baz in particular.

I filmed several songs from the front of the stage so you can see for yourselves..... don't just take my word for it.

After the show, we once again bumped into the aforementioned Larry and Ed, who were now joined by Mike (an ex-NYPD bee expert!) and Ann Marie and all four loved the show! Ed in particular it seems who in toasting his fortune at being there had lost the ability to articulate by the end!

And so that was it, our 1 date tour had come to an end and so after wishing our compatriots a safe passage to Boston, we stepped back out into a humid and sticky New York night and limped back up to the subway.

It was a long way to go....
It cost a fortune.....
But its up there as one of the best of the many that I have seen, so no complaints.

Oh and a special thanks goes to Baz and Owen. Cheers guys.